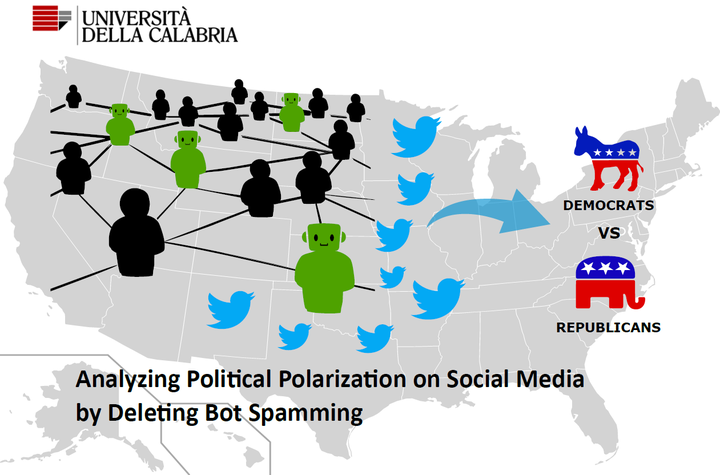 Social media platforms are part of everyday life, allowing the interconnection of people around the world in large discussion groups relating to every topic, including important social or political issues. Therefore, social media have become a valuable source of information-rich data, commonly referred to as Social Big Data, effectively exploitable to study the behavior of people, their opinions, moods, interests and activities. However, these powerful communication platforms can be also used to manipulate conversation, polluting online content and altering the popularity of users, through spamming activities and misinformation spreading. Recent studies have shown the use on social media of automatic entities, defined as social bots, that appear as legitimate users by imitating human behavior aimed at influencing discussions of any kind, including political issues. In this paper we present a new methodology, namely TIMBRE (Time-aware opInion Mining via Bot REmoval), aimed at discovering the polarity of social media users during election campaigns characterized by the rivalry of political factions. This methodology is temporally aware and relies on a keyword-based classification of posts and users. Moreover, it recognizes and filters out data produced by social media bots, which aim to alter public opinion about political candidates, thus avoiding heavily biased information. The proposed methodology has been applied to a case study that analyzes the polarization of a large number of Twitter users during the 2016 US presidential election. The achieved results show the benefits brought by both removing bots and taking into account temporal aspects in the forecasting process, revealing the high accuracy and effectiveness of the proposed approach. Finally, we investigated how the presence of social bots may affect political discussion by studying the 2016 US presidential election. Specifically, we analyzed the main differences between human and artificial political support, estimating also the influence of social bots on legitimate users.